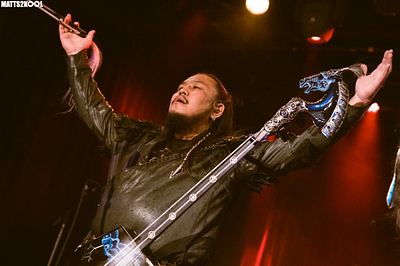 SHOW REVIEW: The Hu with The Haunt at Bimbo's 365 Club in San Francisco

The Hu and The Haunt were in town for some OutsideLands Night Show fun!

It was a nice cool night in San Francisco on October 30th, the night before All Hallows Eve!

I arrived at Bimbo's and already seen quite a few people lining up for the show. As I went to stand in the line for Will Call to pick up my pass, I talked with a fan who stated he saw The Hu perform the day before at one of the main stages at OutsideLands but he had a not-so-great experience and wanted a more intimate environment and Bimbo's 365 Club was the right venue for this. 2 nights for the same band!? I say, why not?

We finally made it inside at 9pm and I arrived front and center in front of the stage to prepare for the first act at 10pm, The Haunt.

The Haunt was finally up! A band named The Haunt right before the scariest day of the year? That says something! They planned this out very well especially when it came to timing!

The Haunt played some amazing songs. One song in particular that I was clearly rocking out to was "Make Me King", one of their newest singles. The lead singer, Anastasia Grace Haunt, fittingly named by the way, really rocked the crowd. An 18 year old singer/songwriter with a whole life ahead of her.

Anastasia was rocking out on stage and with no shoes on! That's pretty brave! The Haunt played a shorter set than anticipated, having to skip a couple of songs to prepare the stage for The Hu but they really hit it off with the crowd even with the shorter set. I'd say, watch out for The Haunt. They are bound to make some moves in the music industry!

Next up and headliners, The Hu!

The Hu plays various types of instruments that are native to the Mongolian culture. The main instruments in their arsenal are the Morin Khuur, Tovshuur, Tumur Hhuur, Tsuur and Mongolian throat singing.

The Hu came on stage with a roaring cheer from the crowd.

I was shocked to see how they fit all the band mates on the stage, because frankly, The Hu is a pretty big band when they tour but they made it work out and oh boy did it work out so well!

The Hu had various small fans set up in front of them. I wasn't quite sure if it was to cool them off or to have the wind of the fan make their hair flowy, either way, it's always nice to stay cool!

The Hu started off the set with Shoog Shoog, one of their hit songs from their 2019 album, The Gereg.

The crowd was really getting into it and it was a great song to get the crowd all warmed up for the rest of the set. Set list below.

The Hu finished the night with This is Mongol, or so we thought!

The Hu played one of Metallica's songs, Sad but True which they cover so very well! They also made an awesome music video to go with the song too which is below.

Overall, the night ended very well and the crowd left very pleased with what they witnessed with 2 very well talented bands.

This isn't the last we see of them!